“What is that?” my aunt asked with eyes as wide as her smile. That’s the usual reaction I’ve received when using the Nokia Lumia 900. Sleek, bold, and beautiful, the Lumia 900 is eye-catching. Just looking at it makes you want to pick it up and find out what it can do. Its impressive design packs quite the punch, but with all that beauty you’re left wishing its brains worked just a little bit better.

Nokia has a reputation for  making beautiful phones and the Lumia 900 is no exception. It features a smooth polycarbonate body coated in an arresting cyan blue. Quietly sitting on the back of the phone is an 8MP camera sporting Carl Zeiss optics and a duel LED flash. On the front, a 4.3” AMOLED ClearBlack glass touchscreen and 1MP front-facing camera gives a bold finish to a very slick looking device. 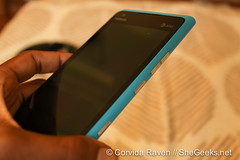 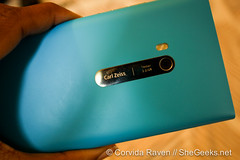 The smooth polycarbonate body is interrupted by volume buttons, a power button, and a dedicated camera button on the left side of the device. At the top of the Lumia 900 sits a headphone jack, usb charging port and sim card slot. Though the Lumia 900 comes with 16GBs of storage, there’s no memory card slot to increase its storage size.

Windows Phone runs without a hitch and the Metro UI is a breeze to swipe and scroll through on the Lumia 900. At first, Metro feels refreshing with its bold tiles (large icons) on the home screen and emphasis on typography within the apps.

The lack of customization options makes the the home screen feel stale over time.  You can “pin” individual apps to the home screen or make use of Live Tiles, personalized data icons that bring visual flare to the home screen. Unfortunately, Live Tiles either aren’t available or don’t work properly in many apps. By constantly updating in the background, they also accelerate the drain on battery life. 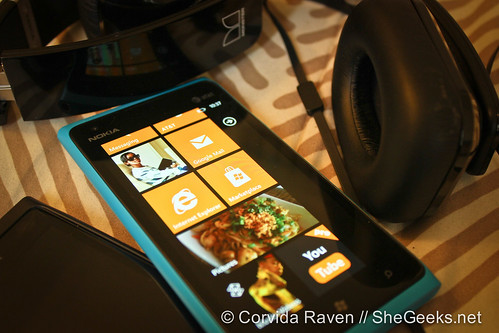 This is as far as customization goes for Windows Phone. Still, I love the concept of “pinning” your favorite apps to the home screen. You can even pin music albums, artists, songs or videos to the home screen for quick access. Be careful about going pin crazy.After 10 tiles are pinned, scrolling down to find what you’re looking for begins to feel redundant.

In the future, it would be great to see Microsoft provide a horizontal scrolling layout for the homescreen in addition to option to set a background. Not only would that look more appealing, it’s more inline with the home screens of today’s mobile devices.

Transferring Contacts To The Lumia 900

How do you get your contacts from your current phone to the Lumia 900? The easiest way to do this is by using Nokia’s Contact Transfer app. It works flawlessly with the iPhone 4 to transfer contacts exactly the way you created them are via bluetooth. 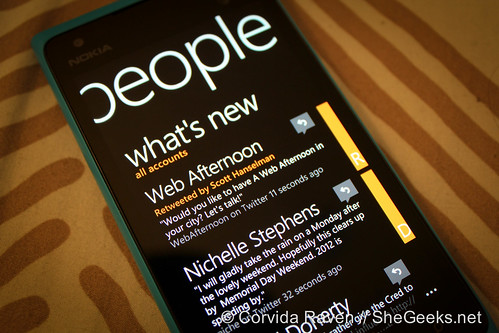 What happens after transferring contacts is creepy, frustrating and beyond invasive. Contacts are immediately usurped and uploaded to the Windows Live account setup on the device. You can still see your contacts, but they live on your Windows Live account versus on your phone like you would expect.  There are only a handful of ways literally, to stop this behavior in Windows Phone. The only way I’ve found to stop the syncing of contacts to Windows Live is to sync via AT&T’s Address book feature.

Oddly enough, there’s little to no desktop contact management solutions offered for Windows Phone. Is Microsoft that serious about keeping your contacts in the cloud? It sure feels like it.

Transferring Pictures, Videos, And Music To The Lumia 900

To get pictures and music onto the Lumia 900, Zune or  the WP7 Connector for Mac are the only ways to go. They’re both offer very basic media management options compared to iTunes. On a Mac, WP7 Connector relies on iTunes and the iPhoto library to sync your pics and tunes. If you’re not syncing media through these apps on a Mac you may run into some problems. 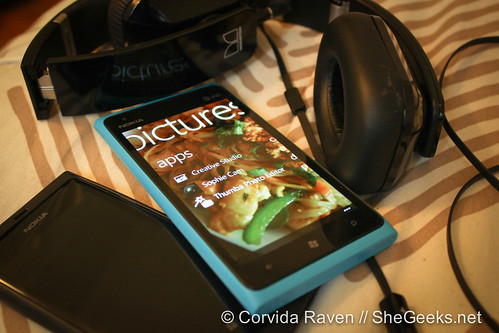 I watch more media on the Lumia 900 than my iPhone 4. Though the display isn’t of retina quality, you’ll love watching media on the Lumia 900. Colors pop even on the lowest brightness settings and you won’t have trouble hearing jams from the booming speakers at the bottom of the phone. Paired with the Nokia Purity headset by Monster to match, the Lumia 900 offers one of the most engaging mobile media experiences.

I’m addicted to apps. Browsing apps like AppAdvice, AppShopper and the Apple App Store looking for new apps is a daily hobby. Apple and Google do a great job of curating and surfacing the best apps in the bunch. Unfortunately, browsing the Windows Phone Marketplace for apps leaves much to be desired.

There are about 6-7 app featured in the Marketplace each week, but Microsoft does a poor job of surfacing the gems inside. A quick search for Twitter shows the official app, but doesn’t give immediate results for more popular Twitter clients like Carbon, Rowi, and Mehdoh.  To combat this, there are apps like Nokia’s App Highlights and AppFlow App Discovery to find the diamonds in the Marketplace.

Despite the hurdles, I currently have over 50 apps and games on my Lumia 900 compared to only 27 on my iPhone and I use a least 12 of them weekly. I’m still waiting on a apps like Sparrow for email, Feedly for my RSS feeds and Instagram. Otherwise, I’ve found just about all the apps on my iPhone in the Windows Phone Marketplace. Some of my favorite apps include those released by independent parties (MetroRadio, SuperTube, 4th & Mayor, Carbon) where official parties are a no-show. 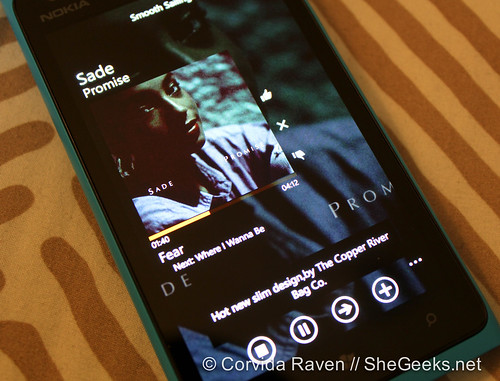 Keep in mind that your Windows Live account has a five device limit. After you’ve registered five devices you have to remove one to use the Marketplace, among other things. Devices can only be removed through the Zune PC software and only once every 30 days.

Not only is Nokia famous for making beautiful devices, but for building quality cameras in those devices. The expectations for the camera in the Lumia 900 were high. Nokia came close to delivering, but ultimately falls short. The native camera app offers more control than expected, providing options notably absent from the iPhone 4 and 4s such as the ability to select a white balance or ISO.

Despite the options, the quality of images from the Lumia 900 falls short of Nokia’s previous efforts. The image I see on the screen from the native camera app is never the same as the picture that’s actually taken. I get a different picture from the camera depending on what app I’m using. Apps like Nokia’s Creative Studio, Sophie Cam, and Thumba Photo Editor do a much better job with taking photos than the native camera app.

While photos from the Lumia 900 are worthy of emailing and posting on Facebook,  my iPhone 4 produces sharper results.

Nokia delivers another device with excellent call quality and reception. Calls are crystal clear on the Lumia 900. It excels most at blocking out background noise. You won’t have to worry much when using this phone in a crowded place.

AT&T’s LTE service is a hit or miss. In Brooklyn and the Bronx, it’s pretty much on par with AT&T’s 3G services running anywhere between 1 and 3Mbps (slower than wifi). In Manhattan, download speeds reached a speedy 9Mbps, but falls short of the 11Mbps I’ve experienced on Verizon’s 4G network.

Hands down, the Nokia Lumia 900 is the best Windows Phone device on the market. At $100 with a 2-year contract on AT&T, this is phone is a steal. Its beautiful design and the alacrity of Windows Phone will impress those looking for a stylish change in mobile devices.

There’s still some ground for Nokia and Microsoft to cover. Nokia’s efforts on the Lumia 900 could have used better to take advantage of the bells and whistles headed to the next version of Windows Phone known as Apollo. The Lumia 900 is exciting enough to keep an eye on Windows Phone, but it always feels like that every Windows Phone device I’ve tried.

Is that all Windows Phone will ever be, a platform to “keep an eye on”? I hope not.

A natural pioneer at grasping the rapidly changing landscape of technology, Corvida Raven talks tech in plain English on SheGeeks.net.