Today, Google addressed what’s coming to the Android platform this year. The biggest announcement out of their live-streamed press conference is Android 3.0 aka Honeycomb, the tablet optimized-version of Android. While consumers and developers can expect a lot from this update, the biggest news is the new web version of the Android Market. The Android Market officially has a website. Android owners are no longer tied to using their phones to search for apps in the Market or relying on bloggers to do all the heavy work. The full Android catalogue of apps is available on the web and feels a lot like the Chrome web store.

A search bar sits at the top of the site and beneath it, a carousel of featured apps dominates the page. Just below are three sections displaying the top Android top apps. Categories are divided and listed under games and applications in a left sidebar. It’s very reminiscent of iTunes.

The homepage wants to be minimalistic, but feels empty to me. There are no ratings or review stats at a glance from the homepage. Just a name, icon, and install button. It’s not as busy as the iTunes App Store, but it also doesn’t give off that air of excitement that the App Store. I don’t feel compelled to browse the android market on the web, the way I do with the App Store.

Though we’re talking about a web service versus software, the iTunes App Store is the biggest competitor to Android Market, web version or otherwise. 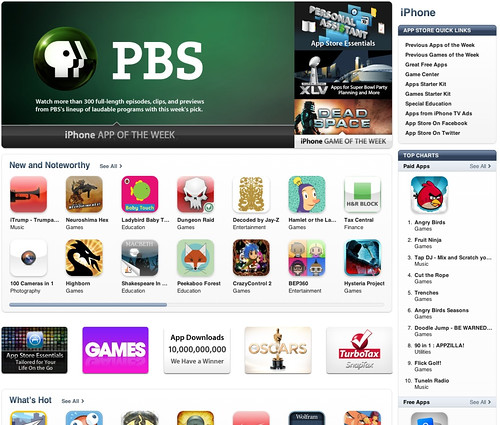 To purchase or install an app, just head to its page in the Market. App pages are broken down with the standard information necessary to make an informed decision like details, screenshots, and user reviews. Purchasing apps was similar to buying an ebook from Amazon. Click the buy button and you’ll see a brief summary of app permissions and an option to select which device the app is installed to (assuming you have multiple devices). This section automatically filters out devices that are incompatible with the app. It should be noted that developers can give specific prices for various currencies within the web Android Market. 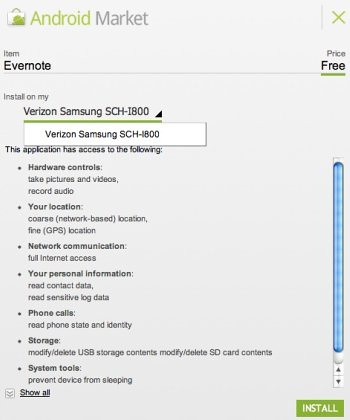 Pages also feature related apps from the same developer and related apps in the Android Market. QR codes are also on every page and can be used to download the app from an Android phone.

Let’s talk about the game changer in the web version of the Android Market. Google has introduced a new feature to all Android devices that provides a seamless experience in getting apps from the web market to an Android device.

Previously, apps could only be downloaded from a phone or tablet because that’s the only place the Market existed. As of today, you can install an app from the web Android Market and the app will automatically download to your device. This is a useful form of wireless syncing absent on most smartphones. The best thing is that you don’t need Android 3.0 to take advantage of it.

The experience was fast, quick, and on par with downloading apps from the App Store on iOS devices. Though the Android Market isn’t a huge leap over the App Store, being able to download an app to your phone from the web puts the Market a step ahead of the competition.

If you’re an Android owner, what do you think of the web Android Market? Do you like the added ability to send app downloads to  your device wirelessly?

A natural pioneer at grasping the rapidly changing landscape of technology, Corvida Raven talks tech in plain English on SheGeeks.net.

Google Pixel 4a Review: Do More With Less

Microplastics: Find Out How Much You Consume